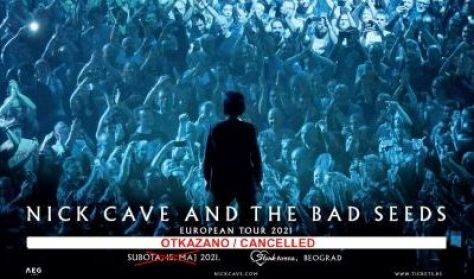 Nick Cave and The Bad Seeds

❗️ Important announcement of the concert organizer - Nick Cave and The Bad Seeds❗️Dear friends Nick Cave and The Bad Seeds,Due to the worsening situation caused by the pandemic, the management of the band Nick Cave and The Bad Seeds made the decision to canceled their world tour in 2021, which was supposed to include a concert on May 15 in Belgrade's Štark Arena.The members of the band officially announced themselves on this occasion:"We are very disappointed to announce that the Nick Cave & The Bad Seeds 2021 UK and European tour can no longer go ahead due to the ongoing situation with Covid-19.The complexity and scale of the tour we had planned, combined with the continued uncertainty around the pandemic means that despite the hard work of everyone involved we have not been able to guarantee that the shows can happenWe are continuing to work on alternative plans for 2021 and 2022 and hope to announce some better news next year.Sending love to you all.Nick Cave & the Bad Seeds."All tickets purchased for the Belgrade concert on May 15 at the Štark Arena will be refunded. For all those who bought tickets online, the money will be automatically refunded in the next month to the account from when the tickets were bought.The ticket refund process will begin on Wednesday, December 9th. Thank you in advance for your patience and understanding regarding ticket refunds.We know that all of you, just like us, were looking forward to this concert. We hope that the current situation will improve and that we will have more good news in the coming year, but also that we will continue to enjoy the concerts in full glory. Take care and take care of everybody around you ❤️Event organizer: Charm MusicBy the decision of the event organizer and Ticket Vision d.o.o. for all those who bought the tickets online, the money will be automatically refunded to the account card with the purchase made.The refund refers to the price categories of the tickets.The expected realization for refunded is from December 09 to January 11, 2021.You will receive an e-mail/confirmation in the mentioned period from office@tickets.rs.Your Ticket Visionwww.tickets.rs

2.     This ticket is sold by the Promoters directly to the Consumer.  Any tickets purchased by business or traders in breach of the Terms and Conditions of Ticket Sale will be cancelled.

3.     This ticket may IMMEDIATELY BECOME INVALID if resold OR OFFERED FOR SALE.

4.     Ticket sales are limited to a maximum of six tickets per person.

Nick Cave & The Bad Seeds have rescheduled their European and UK Tour to start in Spring 2021. All original tickets remain valid. Dates and info here: nickcave.com/tour-dates

Nick Cave and The Bad Seeds’ concert in Belgrade will be held on May 15th 2021.

Regarded as one of the world’s greatest live acts, the band will perform in 19 countries including 6 shows in the UK.

On Nick Cave and The Bad Seeds Live:

"Joyous and unexpectedly triumphant” The Guardian

“Tense and thunderous at times, tender and cathartic at others. It’s masterful” The Independent

“An extraordinary response to the unimaginable” The Telegraph

Tickets on sale Friday 25 October 2019 at 10am local times at nickcave.com*

Nick Cave and The Bad Seeds' seventeenth studio album Ghosteen was released digitally on 4 October, and has been widely received as their best work ever. Vinyl and CD will be released on Friday 8 November, pre-order now at nickcave.com/ghosteen

“...Stunning double album that sets desperation against empathy and faith. On one level, it shouldn’t be surprising that it’s as good as it is...Nevertheless, listening to Ghosteen, it’s very hard indeed not to be taken aback” The Guardian

“Grand in design and filled with rare beauty and profound, poetic lyrics” The Sun

“A masterpiece of melancholy” Rolling Stone 4.5

“An extraordinary album brimming with agony, honesty and quiet wonder” The i

“Nick Cave is in the form of his life and Ghosteen is one of his greatest ever achievements.” 10/10 The Line of Best Fit

"On his new album, Nick Cave conjures a profound and powerfulsense of wonder” The Quietus

INFO (19.03.2020):Due to the new situation, Nick Cave and The Bad Seeds are delaying their European and UK tour to protect their audiences worldwide. A new date for the Belgrade concert will be announced soon. Ticket sales will not be suspended. All tickets purchased for the concert in June will also be valid for the new date. Please follow all further information on the facebook event.